Paul's final letter, the second to Timothy, stands alone in its warmth, warning, and loving encouragement.

Second Timothy. Writing from a Roman prison, Paul imparts his final words… his last will and testament to his spiritual son Timothy who is ministering in the midst of opposition and hardship in Ephesus. Paul stresses the importance of godly living, preaching the Word both in and out of season, and preparing for the coming apostasy within the church. Underlying all that Paul writes is the importance of God’s Word—the only foundation strong enough to withstand persecution from without and problems from within (1.) 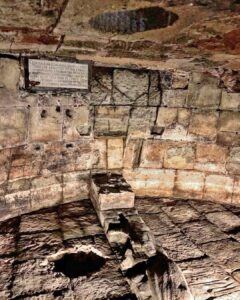 Dating to the 5th Century, “tradition holds” that Nero confined Paul and Peter in the Mamertine Prison, adjacent to the Roman Forum. If the site’s current condition is essentially unmolested from antiquity, the only access was a hole in the ceiling where prisoners were lowered down into it and then pulled out for their execution. It is hard to tell by the picture/image, but it is a small building with only two prison cells. It may have been the oldest prison in Rome.

This is where Paul writes this last letter.

This is the most personal letter Paul wrote. A pastoral letter, written to a person rather than a church, received by Timothy in Ephesus.

Rome had burned during July 64 A.D. and Nero blamed Christians. This meant it would be dangerous for Christians, especially if they had contact with Paul. Hence: Paul’s exhortation to Timothy to preach the word and stay in the fight.

This is Paul’s last letter. There are good arguments made to suggest Paul wrote it in 67 A.D. because we know Nero executed him, and that Nero committed suicide in 68 A.D.

2 Timothy is unlike either 1 Timothy or Titus. It is an intensely personal…written to encourage Timothy in his difficult [mission to come to Rome. It overflows with a father-like love, concern, and encouragement as he will face literal dangers. (2.)

Paul knows his time is short and he is leaving his last will and testament: a theological inheritance and priceless estate, for which he must be on guard. He is clear: danger awaits—real danger.

Though a warning in part, this is a loving letter, and very personal.

To Timothy, my beloved son: Grace, mercy and peace from God the Father and Christ Jesus our Lord.3I thank God, whom I serve with a clear conscience the way my forefathers did, as I constantly remember you in my prayers night and day, longing to see you, even as I recall your tears, so that I maybe filled with joy. For I am mindful of the sincere faith within you, which first dwelt in your grandmother Lois and your mother Eunice, and I am sure that it is in you as well.
2 Timothy 1:2-5

Yet, Paul and Timothy both face real and present danger:

Consider your calling, your heritage, and the gospel—and don’t be afraid. Join me in suffering…

A good lesson for you and me. Are we ashamed of the gospel? Are we timid? Or are we grounded by faith in the Lord and the power of God?

What would it take for you and me to not be ashamed of the gospel?

You don’t do it in your flesh, you do it in the power of God. It isn’t convincing people, it’s simply sharing with them that Christ lived, died, and rose again in our place, on our behalf, and any who place their trust in Him are given forgiveness of sins and new life with Him.

The transactional piece is between that person and God. Just clearly explain the story.

It’s not about you. It’s about the people that you know, that don’t know the Savior.

Paul knows what he’s entrusting to Timothy. Here is our inheritance, I’m going to hand it to you. What will you do with it?

For which I was appointed a preacher and an apostle and a teacher.
For this reason I also suffer these things, but I am not ashamed; for I know whom I have believed and I am convinced that He is able to guard what I have entrusted to Him until that day. 2 Timothy 1:11-12

Many will remember the hymn:

Maj. Daniel Webster Whittle’s 1883 hymn, I Know Whom I Have Believed:
I know not why God’s wondrous grace
To me He hath made known,
Nor why, unworthy, Christ in love
Redeemed me for His own.
Refrain:
But “I know Whom I have believed,
And am persuaded that He is able
To keep that which I’ve committed
Unto Him against that day.”

You therefore, my son, be strong in the grace that is in Christ Jesus. The things which you have heard from me in the presence of many witnesses, entrust these to faithful men who will be able to teach others also. Suffer hardship with me, as a good soldier of Christ Jesus. 2 Timothy 2:1-3

This is not merely mustering up the discipline to be strong—be strong in the grace of Christ. We cannot make our flesh better. This is all done by the power of God in us.

2 Timothy 2:2 is a verse frequently used by ministries and organizations. Its illustrative of a banking term—entrust meant entrust. God has not entrusted this to us for us to hoard, but to give it away. Are we entrusting the gospel to men and women of faith who will be able to teach others also? This is discipleship.

Finally, Do not be surprised that we suffer hardship. It’s part of the gig.

Be diligent to present yourself approved to God as a workman who does not need to be ashamed, accurately handling the word of truth. 2 Timothy 2:15

You and I will never waste time in God’s word.

“Accurately Handling” is unique in the New Testament here. Proverbs 3:6 and Proverbs 11:5 use a similar term: “make your paths straight,” and “smooth his way.” Cut a straight path. In other words: teach correctly.

But avoid worldly and empty chatter, for it will lead to further ungodliness, and their talk will spread like gangrene. 2 Timothy 2:16-17a

That word gangrene pretty much meant gangrene in the ancient world. It also meant cancer.

Have you been in a small group or bible study when someone asks, “What does this verse mean to you?” That’s the wrong question. “What does it mean?” is the right question, followed by: “How do we apply it?”

But realize this, that in the last days difficult times will come. For men will be lovers of self, lovers of money, boastful, arrogant, revilers, disobedient to parents, ungrateful, unholy, unloving, irreconcilable, malicious gossips, without self-control, brutal, haters of good, treacherous, reckless, conceited, lovers of pleasure rather than lovers of God, holding to a form of godliness, although they have denied its power; Avoid such men as these. 2 Timothy 3:1-5

This could’ve been written today. A simple way to look at it may be to flip the list. Who do we want to be?: not a lover of self, money, not boastful not arrogant, obedient, grateful, holy… and a lover of God.

All Scripture is inspired by God and profitable for teaching, for reproof, for correction, for training in righteousness; so that the man of God may be adequate, equipped for every good work. 2 Timothy 3:16-17

I solemnly charge you in the presence of God and of Christ Jesus, who is to judge the living and the dead, and by His appearing and His kingdom: preach the word; be ready in season and out of season; reprove, rebuke, exhort, with great patience and instruction. For the time will come when they will not endure sound doctrine; but wanting to have their ears tickled, they will accumulate for themselves teachers in accordance to their own desires, and will turn away their ears from the truth and will turn aside to myths. But you, be sober in all things, endure hardship, do the work of an evangelist, fulfill your ministry. 2 Timothy 4:1-5

The time when “they will not endure sound doctrine,” is here, which is why it’s so important that we’re in the Word.

You will never waste time in God’s Word.

This is the last thing Paul wrote. What are you going to take away from it?

Listen on your favorite podcast app

Why Study the Bible from Genesis to Revelation?

Dr. Mark Chavalas, Dr. Wendy Widder, and Dr. Kevin Zuber join Michael to wrap up The Big Book—Cover to Cover with a discussion about the value of studying and understanding scripture as a whole, from Genesis to Revelation.

It’s remarkable to step back on this Big Book and see that it begins and ends with connections that are impossible to ignore. In this episode, Michael teaches an overview of the book of Revelation.