The Big Book–Cover to Cover: Ezekiel

The Big Book–Cover to Cover: Ezekiel

Michael teaches through the book named for the prophet Ezekiel. Join us as we look at what his visions reveal to us about God's judgment, righteousness, and mercy.

Ezekiel prophesies among the Jewish exiles in Babylon during the last days of Judah’s decline and downfall. His ministry is in some ways similar to that of his older contemporary, Jeremiah.
But while Jeremiah delivers a chilling message of destruction in Jerusalem, Ezekiel brings a warming message of reconstruction in Babylon.
Jeremiah is a man of tears, Ezekiel is a man of visions.
Join us as we look at what his visions reveal to us about God’s judgment, righteousness, and mercy. 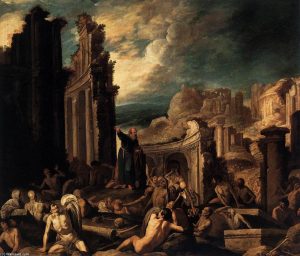 Fancisco Collantes 1630 painting of “The Vision of Ezekiel” depicts the prophet in a region known as Tel Aviv (likely not our present day Tel Aviv) melds a lot of the account, including the valley of dry bones. At God’s command, the bones will rise up and live in reference to God’s people and a foretaste of God, through the person and work of Jesus Christ our Lord raising the dead.

And those visions stretch from horror to hope; from condemnation upon Judah’s faithless leaders and godless foes, to consolation regarding Judah’s future.
Through it all, mankind would see the glory of Israel’s sovereign God, and “‘they shall know that I am the LORD’” (6:10). (1.)

A helpful way to look at the book of Ezekiel, in broad strokes, includes:

Jeremiah, Zechariah, and Ezekiel were the only prophet-priests (3.)
Ezekiel’s prophetic ministry spanned about 22 years (593-571 BC), from age 30 to 52. Before Jerusalem fell, Ezekiel’s message focused on Judah’s forthcoming destruction because of her sin. After Jerusalem’s fall, Ezekiel’s message centered on Judah’s future restoration. (4.)
Ezekiel is the only major prophet with such a precise chronological arrangement (5. dyer 1226)

Ezekiel is another prophet in the line who warns that judgment is imminent. Every prophet had a horrific task, but we have hard insight into Ezekiel: Ezekiel 3:12, Ezekiel 3:14, Ezekiel 3:16-22
Notice God’s message to Ezekiel:

Ezekiel’s visions from God reveal to him God’s glory leaving the Temple, which had become corrupt, immoral, and polluted.
While God’s people will be dispersed into exile, He will not completely abandon them.

Listen on your favorite podcast app

How did you come to Christ?

We’ve got a lot of new Ask Dr. E’s listeners around these parts and we thought we’d give Michael 10 minutes to tell you a little bit more about himself and how He came to know the Lord.

Roe is Overturned: What Now?

In light of last week’s decision, Janet Parshall generously returns to inContext to help us think biblically and critically about what this decision really means and where we go from here.

As you know, Michael is not shy about discussing the Biblical perspective on the LGBTQAI+ lifestyle. A frequent follow-up question we get is, “But what are those 6 passages that are commonly used to discuss this topic?” Find them here!